SINGLE BOOMER SURGERY SABBATICAL— The Joy of Nothing 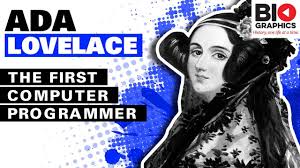 The goal of every self-respecting Boomer is to live forever, physically fit and sexually active, taking up space on the planet, no matter how many Millennials are currently occupying it—even if they’re our own offspring.  If we flunk immortality, we at least want to expire during orgasm while doing Kundalini Yoga as our Fitbits record the electrical activity.

Our bodies don’t always go along with the program.  Health glitches have temporarily interrupted my single Boomer dating progress. They didn’t remove my libido, but dating is on hiatus while I get my body back. All that time in bed, with no mature high jinks to show for it. There is nothing inherently sexy about waiting for the Steri-Strips to fall off.

Here’s the question–while taking a break from mature romance, shouldn’t I be able to do something meaningful–other than developing an LTR with Netflix Streaming?

The great thing about a job is that it gives you an excuse. (It’s also nice not to have to live in your car and have health insurance and an occasional latte, especially for those of us who are in the sub-category boomer, single and broke) .

The real benefit of having a job is the certainty of how productive you would be–if you only didn’t have to go to work.

Surgery is not a fun way to take a sabbatical, (which is another way to frame Temporary Disability). The whole concept of surgery is sketchy—to have someone make you feel a lot worse in order to feel better. Just why would you even let anyone come at you with a knife, let alone pay them to do it? Good thing for surgeons that anesthesia was invented.

Granted, I may not be in good enough condition to tote that barge and lift that bale. But if I have the time and energy to bitch and moan, shouldn’t I be able to do….something?

What did I do today? It’s 9 PM, and I just got around to making myself some dinner because I finally realized I was hungry. With all day free, wouldn’t I have prepared something special, the kind of gourmet treat (organic, carb- and gluten-free) that I never have the time to put together when I finally get home from work? No. That’s why the Good Lord gave us Trader Joe’s.

There’s something so very seductive about doing nothing. Especially if you’ve spent years—like most of us—running in place on that treadmill of goal-setting and self-improvement towards the ever receding horizon of complete self-actualization (while still trying to keep the wolf from the door). Warren Buffett’s advice, Ted Talks, the Keto Diet, the Paleo Diet, Goop wellness according to movie stars, Dr. Andrew Weil, colonics… The road goes on forever. It’s enough to make me want to lie down to catch my breath–even if I weren’t already.

Doing nothing creates its own special energy field. It’s not me; it’s the laws of physics. Having all this time creates a special kind of entropy—“lack of order or predictability; gradual decline into disorder”–my new normal.

Doing nothing is especially seductive when you can always give yourself the impression that you’re doing something. Email…..takes….up….so….much….time…. . Look-something new from Bon Appetit—-Gavin Newsom is emailing me again (we’re like this), another important announcement from Walgreens. Then there’s Facebook. And Facebook. And Facebook. Experience the Infinite by trying to catch up with your Timeline, which extends back into the Pleistocene Era, even though Facebook has only officially been in existence since February, 2004.

I know that we’re supposed to call it Meta:  Social Metaverse Company. Right.

Fortunately, I’ve spent more of my life than I’m willing to admit without social media. I’m old enough to remember the original Atari 400 that had a keyboard so flat you could smear it with peanut butter and it would still work.

Am I the only one who feels like I’m the subject in This Is Your Life, (a show unknown to Millennials), when I visit the Computer History Museum? The Atari 400, the TI 99 …. all those computing dinosaurs that the kids (under thirty–or is forty?) have never heard of. At a meeting a few years ago, before I succumbed to the iPhone, a twenty-something grabbed my Palm Pilot out of my hand. “I’ve always wanted to see one of those!” he enthused, as if he had just encountered a unicorn.  No, not a venture capitalist’s unicorn-the older version with a horn on its head. 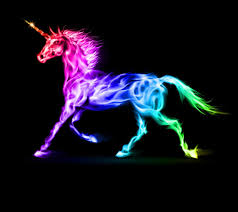 The Computer History Museum showed me one of the greatest intergenerational divides in our culture. They were exhibiting Charles Babbage’s Analytical Engine, a pioneering attempt to create the first all-purpose computer. The docent was explaining the contributions of Ada Lovelace, a remarkable woman mathematician, the first computer programmer, and daughter of the mad Romantic poet, Lord Byron, (who scores among the Top Ten of Terrible Husbands, Fathers, and/or Siblings).

Every time the hapless guide tried to say “Ada Lovelace,” the words “Linda Lovelace” issued involuntarily from his lips. Everyone over forty was rolling on the floor, while he turned white, then beet-red. Linda Lovelace was the star of Deep Throat, an adult film that had nothing whatsoever to do with the Deep State or the Metaverse, for that matter, and everything to do with oral sex and its star’s anatomically improbable ENT capabilities.

The youth under forty just stood and stared blankly at us as–their embarrassing seniors–convulsed with laughter. The poor docent started again, and once more introduced Babbage’s brilliant mathematician collaborator-comLinda Lovelace.

What have I done today? I do read books—so twentieth century—but I can’t claim it as an accomplishment–I always read. I’d read the packaging ingredients on frozen food or hemorrhoid cream if there were nothing else available.

I did talk on the phone. It’s amazingly easy to call up people during the day without all those annoying work duties to get in the way. CVS–your prescription is ready. A leisurely wait on hold of fifty minutes to get a doctor’s appointment, enjoying the elevator music.

And I did do a little writing. And what did I write about? Nothing. 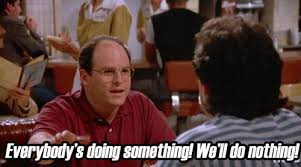 Supposedly, Seinfeld is a show about nothing. Jerry did all right with that. Maybe there’s hope for this fallow period of my love life. My new guidebook to life: Don’t Just Do Something; Sit There.