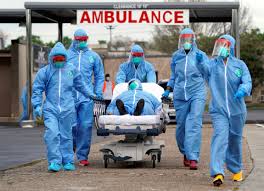 The news feed for catastrophe changes hourly.   Behind the front lines  conjures images of  Ukraine.  Thank {feel free to insert your favorite deity} that Putin isn’t physically invading Silicon Valley, although he’s made plenty of incursions virtually.  I’m still recovering from Covid PTSD: the experience of being a boomer working behind the Corona Front Lines, long before we had vaccines and boosters.  Covid is beginning to be a memory, the urgency receding in the rear view mirror, but it doesn’t feel that way.  Just give me a little more time to process my Covid PTSD before the next assaults on my safety and well-being–fire, earthquake, Global Warming, pizza with ham and pineapple.

I wasn’t one of those heroic doctors or nurses briefly beloved by the media.  My coworkers and I are almost at the bottom of the medical food chain, but still classified as essential designated disaster workers. We were all within nodding distance of Covid long before vaccines or boosters, when our only protection was a cloth mask purchased on Etsy–and deemed least effective by the CDC.

It took me a long time to pay attention to the Corona Virus although I worked at a major medical center, like Jonah, in the belly of the whale. I kept trudging to work while everyone else was home in sweatpants exchanging playlists and Netflix recommendations, like a draft horse who can only see the row ahead to plow.. I didn’t even realize that the most important item I needed to survive a pandemic was copious amounts of toilet paper. When I made my usual grocery shopping trip on a Sunday, it was all gone. There were long strips of yellow tape in front of the empty shelves, exactly like a crime scene.

I wasn’t paying attention precisely because like the Helen Reddy song, I am Boomer, hear me roar. The birth date on my driver’s license is just a bureaucratic typo. We boomers are the generation that cracked the code to eternal youth. With enough exercise and wheatgrass, self-care, and self-centeredness, we can last indefinitely. For us boomers, there will always be enough time for another chapter, another reinvention. Folks even too old to be boomers run for President and/or are President or continue to be international rock stars. Surely, we boomers can keep up with our elders– Mick Jagger and Sir Paul James McCartney? 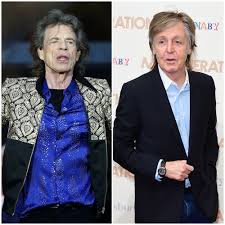 At first, the good news was that the only people succumbing to the virus were the elderly with comorbidities.

Is there a secret society that meets in the deserted bar of a country club golf course whose goal is to make medical communications even more confusing than they already are?   “Comorbidities, I love it,” I can hear the plotters chortle. “What else can we come up with to confuse the patient, make the nurse sound stupid, separate the men from the boys? Let’s make the nurse ask every old duffer if they identify with the gender on their birth certificate and watch the oldies’ eyes widen with shock. Let’s ask patients if they have ‘any significant clinical history’—it’s too simple to ask ‘‘have you ever been sick before?”   (One patient failed to tell me that she had been operated on for cancer because she had no idea what ‘significant clinical history’ meant).

Then my brain slowly began to absorb the information. Elderly with comorbidities? That’s me they were talking about!

Every article loved to quote the statistics—over sixty is the statistical group that the Corona Virus loves to attack. As reluctant as we are to admit it on our dating profiles, very few people make it to the over sixty club without some “comorbidity”—high blood pressure, sleep apnea, a cardiac glitch, a little arthritis, a tad of asthma. With First World medical care in ordinary circumstances, these conditions are barely a blip on our horizon. Now our age could become deadly–the deciding factor for our survival. It suddenly felt like  boomers had a target marked on our foreheads–and there were younger bloggers and tweeters celebrating Covid as a “Boomer Remover–our imminent demise, like some grim Spring Cleaning during which all the oldies would be swept away.

I read an online article by a twenty-something so proud of convincing her “fabulous boomer mother” to take the Corona Virus seriously and stay home from her usual Yoga, spa, dance class, Pilates, her women’s group, lunches, brunches, power walks, spa days. But this woman could afford to stay home, and owned a house to stay in.

I belong to the subset of Boomer and broke—no MBA, no BMW, no condo—like the old t shirt I used to wear. 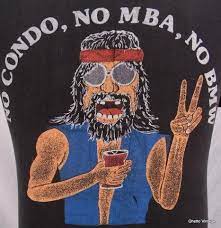 I’m not the only boomer who found herself redefined as an ”elderly single with comorbidities”– without a home or paid off mortgage—or any mortgage—or ample retirement.

I had to work through the pandemic. Lots of us did and do—the consequences of a bad marriage, divorce, no marriage, recession, living our Flower Power Sixties values dressed in tie-dyed t shirts working for non-profits in meaningful but badly paid professions, being free spirits and rolling stones. Being boomer and broke isn’t that unusual-but whoever thought it could kill us?

What was it like to be a boomer on the frontlines during the height of the pandemic? Discombobulating. They took our temperatures at work every morning before we entered the building. I always wondered why.  By the time one of us had a temperature, we were well and truly screwed, and so was everyone else around us.

Every morning, we trudged by deserted cubicles, abandoned by the paper pushers months ago, leaving behind their sweaters and shawls, half empty soda cans, yogurt containers with the spoon still sticking up, jumbled papers on their desks, family photos gathering dust. It looked like they were swept up by The Rapture. 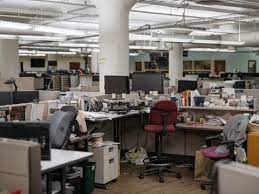 But they were home, in relative safety. Thank goodness there will be enough bureaucrats to process all the claims when this pandemic is finally over, I remember thinking.

Because I’m a senior, I received warnings multiple times every day to shelter in place; notifications about the special senior shopping hours for “our most vulnerable citizens,” and other alerts about how generally at-risk I was. Meanwhile, millions of younger, healthier folks had been working from home for months, including my kids.

It was a kind of cognitive dissonance–I have to stay home to save my life. I have to go to work to save my ass.

There’s also the fact that living in my car wouldn’t be good for my health.

I talked to people every day who do live in their cars, not to mention families who share a room and a common bathroom with a whole houseful of people. And to lots of other folks with pre-existing medical conditions who were looking forward to quite a few more years, on planet Earth only to find out that they were sitting ducks for the the Corona Virus.

Even with the six-foot rule for social distancing, people bunched up together. Most hallways , restrooms and offices are not designed for people to be six feet apart. There’s the woman I have not yet identified who I still hear leaving the bathroom without washing her hands.  I guess only Number Two counts in her life. I hope to find out who she is so I can avoid her dish at the next potluck–if there’s ever another potluck. There was the shmuck who got too close to me in the lobby, coughed without covering his mouth, then apologized. And coughed at me again.  That’s like saying I’m sorry when the bullet already left the gun. Or the construction worker who walked towards me on the way to the temperature line– tough guy—his hard hat and boots will protect him. He was also coughing with open, uncovered mouth–and smoking. Maybe he could see I was a Boomer and just wanted to speed up the clearing process. 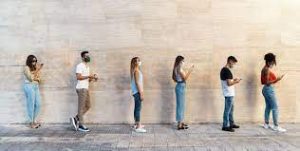 Even with the freeway almost empty, I found myself unable to pass because cars bunched up around me and the car on my left was going at exactly the same speed as I was. It’s human nature to bunch up. I reflexively pull into the next empty space in the parking lot, although I could park many empty rows away.

One day, I saw four young doctors going into the hospital, bunched up close together. I’ve seen photos of hospital workers in China, Israel, Taiwan, Japan in what look like hazmat suits. covered from head to toe. Our little group of docs looked like kids dressed in hastily assembled homemade Halloween costumes, their hospital gowns fluttering behind them.

As ancillary health care workers with low—or no– priority for PPE, let alone the coveted N95 mask, there was still the fact that our work matters. One 68-yr-old colleague who works with survivors of abuse said, “If I don’t do this work, who will?’ 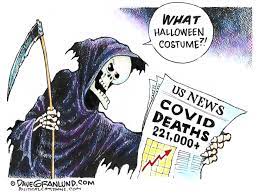 But what if doing your job can kill you?  Turning sixty was going to be just another chapter in the unfolding drama of the boomer life—the next installment in the saga–not the last. As the memories start to fade and new horrors claim our attention, I can’t forget how close we came to the clearance aisle, the disposal bin-like the piles of corpses being stored in refrigerated trailers because the funeral homes were overwhelmed.  Every human zip loc bag was formerly a living, breathing, human being with plans and dreams–and more likely than not, over sixty years old–not to mention black or brown.

Every day now begins and ends with a mantra to the Grim Reaper, a fervent boomer prayer: Not so soon. Not me. Not now.