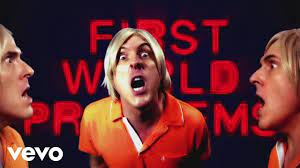 Cancelled in the Cloud-Singing the First World Problem Blues

We all think we have problems. But are they problem problems–or are they First World Problems?

I’m singing the First World Blues. A company that shall remain nameless (but begins with Blue) cancelled my web site during the pandemic, heartlessly erasing over five years of work. They wiped out more than ninety illustrated posts, each one equivalent to a 3-5 page essay. If you believe you have everything safely stored in the cloud, there’s a bridge in Brooklyn I’d like to sell you.

Merriam-Webster (didn’t they use to be just Webster?) defines First World Problems as:

a usually minor or trivial problem or annoyance experienced by people in relatively affluent or privileged circumstances especially as contrasted with problems of greater social significance facing people in poor and underdeveloped parts of the world. “In terms of first world problems, the biggest one is probably a cracked phone screen.”— Ben Sin

My maid is cleaning my bathroom, so I can’t take a shower
When I do, the water starts getting cold after an hour
I couldn’t order off the breakfast menu, cause I slept in till two
Then I filled up on bread, didn’t leave any room for tiramisu…

Is it a First World Problem to lament the demise of a website, since more than a third of the world population—one in three—approximately three billion people-don’t even have access to the internet?

Or the eternal dilemma: almond milk (which may be environmentally unsound) or oat milk?

Do you have any idea how difficult it is to milk an oat?

I leave it to you to decide if losing years of original work as “a trivial problem or annoyance,” rather than a genuine loss. I feel it to be a body blow. Years of work trashed, thousands of words so carefully chosen now lonely, little pixels, bits and bytes, lost in space. Just like that, over 90 complete blog post/essays with links and illustrations and reader comments—five years of work, many hours expended after my full-time job—gone in a keystroke.

I still have to admit that losing your web site is a problem that only a relatively privileged person can face.

As a relatively affluent boomer–very relative, since I will likely be working for the rest of my life–how did I get myself into this predicament?

I am one of the foot soldiers of health care towards the bottom of the food chain. The pandemic snuck up on me. At first, it seemed like something transient that wouldn’t affect us, or only an unlucky few who had traveled in distant, foreign climes.

Then one morning I realized that I met all the criteria of the people most at risk of hospitalization and death–and I was still shlepping into work every day at a major medical center. My kids, my housemate, everyone else I knew-none of whom ever encountered sick patients—had been working at home for months.

Every morning, I walked past the empty desks abandoned by the paper pushers and bureaucrats. There were coats, sweaters, scarves, back pillows, half-empty coffee cups, expired yogurt containers left to molder, as if everyone had rushed screaming from the room.

Meanwhile, the illness, death and dying business was booming. Thousands of phone calls. Contact tracing. Masks and temperature checks. I could recite Covid symptoms backwards and forwards in my sleep. 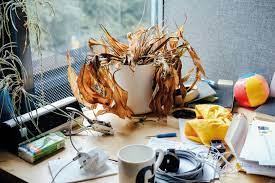 I was talking to extended families trying to quarantine in one or two-room apartments for which they could no longer afford the rent.

I was talking to homeless people who had been temporarily moved from their cars or the street into motels so they could quarantine.  Project Roomkey–why does it take Covid to find housing for people on the streets?

I was talking to people who were trying to arrange Zoom sessions to say goodbye to the dying. The moribund weren’t “only” the elderly—a concept I resent as an aging boomer. There was a 42-year-old wife and mother, a construction worker with six children, a young man starting junior college.  Infected essential workers and other health care workers–like me.  The developers of the iPad never imagined they would be used to broadcast people gasping for breath on a ventilator, saying goodbye.

I was depressed and preoccupied—can’t imagine why. I stopped working on my blog and temporarily forgot it was connected to an old Yahoo account. I had recently paid several hundred dollars for my website fees, so I foolishly thought that I was covered for the year.

What can I say? My priorities were sadly skewed.

My ADD brain just couldn’t handle it all. ADD may also a First World Problem.

The web host company whose name starts with the color of the morning sky sent some automated emails that I didn’t see. I didn’t realize they had a totally separate and unrelated billing cycle for web maintenance and the domain name.

They made no other effort to get in touch with me through any other medium, and they didn’t try very hard or for very long.

If Blue —- had held my website for ransom, I would have gladly paid. In fact, this is a new business opportunity—virtual storage warehouses for websites in arrears–like data debtors’ prison. Of course, I should have backed up every comma—but I foolishly thought that was why I was paying so much money to the web host.

Whenever I got discouraged about having met so few of my life goals, I always had my blog to show. Now, I have to reconstruct years of work. There are links all over the place to my posts, and nobody’s home.

If it sounds like I’m whining, I am. I am woman, hear me roar. I am a boomer blogger, hear me whine.

I know I’m among the lucky and blessed. I didn’t lose my life or any of the people I love to the Pandemic. I’m reminded of more urgent problems at work every day—terminal illness, trauma, paralysis, tumors, disability, death.

But it still sucks to have your work obliterated. But bravely, in the face of such overwhelming adversity, I’m singing the First World Blues. 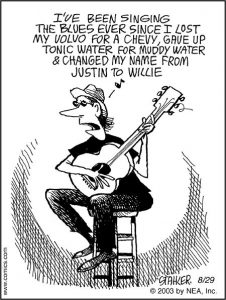