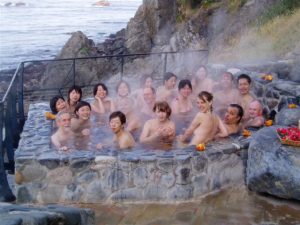 Be There Then-Social Networking Solo

Naked bodies soaking in hot tubs under the California sun. Consciousness-raising (with and without hallucinogens), self-awareness at any price)—Esalen in the 1960s. Fritz Perls, founder of Gestalt Therapy, coined this mantra as the slogan of the self-development and actualization movement of the Sixties: “Be here now.”

I’m being here now at the Starbucks on University Avenue in Palo Alto, Social Networking Central, a block away from the mother ship Apple Store. In the outdoors patio, upstairs, on the bottom level, every human head is bent over laptops, iPads, iPods, Tablets and/or other electronic devices, and every human ear is plugged with some kind of headphone. Dressed in the ubiquitous Silicon Valley hoodie, many of the people here–both male and female–look like monks in a medieval library, bent worshipfully over their manuscripts.

Only the baristas aren’t electronically hooked up, a class apart. Customers give them their drink orders in hushed tones, as rapidly as possible, then return to their electronic netherworld. Ordering drinks is the only human interaction taking place in real time in the same place.

In the olden days, (ten years ago), the only people who talked out loud to themselves were schizophrenics off their medication, hearing voices from beings not actually present. Now, everyone is communicating with disembodied voices.

Each individual here is a unit, alone unto themselves. But they are completely connected—to someone else, somewhere else. We’re all alone together. And it’s a safe bet that at least sixty percent are online, texting, emailing, searching, in pursuit of relationships. Because connecting and being connected is the whole point–but not spontaneously with anyone who is sharing the same space at the same time. 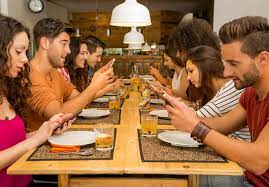 Just in the last 24 hours, I passed a ten-year-old kid on his bike with no helmet, busily texting while he rode in front of traffic. A long-haired girl in platform shoes, thumbs flashing on her cell phone’s keypad, crossing a freeway ramp on elevated feet, looking neither to the right nor left. The perfect family at a concert last night, mother, father, and child, each with their own iPhone, who texted each other and took each other’s photos while the live performer on stage (John Legend)  played a low-tech piano and sang his heart out about social justice, community, and togetherness. The little oblongs of light never ceased to flash as the family managed to not be in the same space at the same time with the performer they came to see performing live. The experience will only become real later when they share their photos on Facebook and watch the performance on YouTube.

Because there is nothing and no one so important that he/she/it can’t be interrupted by electronics. And no experience that is real unless shared, viewed, imported, digitized.

A techie friend swears that when he went out to dinner last week he sat next to a couple who texted throughout the meal. When the man finally looked up and said something to his partner, his naked voice shimmering in space, the woman continued thumbing away and replied, “gross.”

Everyone in this café is intensely riveted, attached, proving beyond doubt that they are totally hooked up, connected, involved—elsewhere. Actually alone, while pretending not to be alone, because each one is so incredibly involved electronically with people who are somewhere else.

The only two people talking are a young woman, her laptop case still zipped, with a much older man who must have been a generationally-challenged father or grandfather. (If he were her lover, they would have met online and he would be hip.) They talk furtively, she looking slightly ashamed as if caught groping under the table while his fly was open.

It is of extreme importance in the Brave New World of continuously alone engagement—a matter of pride and self-esteem—to never appear to be available. I do it myself—God forbid that any roomful of strangers would think that I was actually alone and not of crucial importance at this very moment to someone else, somewhere else.

So, everyone is smiling, laughing, grimacing into their computers/cell phones/iPads/headphones and every other electronic device. We’re all here to be connected, and our mantra is: “Be there then”—be with people who are somewhere else, and never be fully present with the people who are actually here. 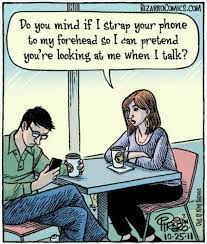 An Immodest Proposal—instead of a flash mob happily stripping off clothes and going naked—let’s stage an event (organized through Twitter) to commit an hour to lay down our electronic arms and spend a full sixty minutes introducing ourselves and conversing with people in the same room. Naked voices commingling. In public. Spontaneous eye contact. Sounds kinky. Then everyone can exchange their email /Twitter /TikTok/Instagram addresses and handless, then revert to Facebook, to be in constant contact without ever having to actually be live and present with another human being.

Alone together. Be there then.